After spending 4 months worth of my free time playing with 5V electronics, I figured it'd be a nice change of pace if I started doing stuff with real 120VAC electricity. 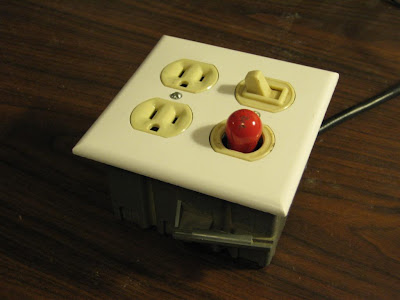 For my first project, I figured I'd build something I've needed all year; one of my desk lamps doesn't have a switch (it came out of a dumpster, like so much in my apartment).  Plugging and unplugging it works, but isn't the ideal solution.  Last year, my dad built his mother a junction box with a wall switch in it so that she could turn on and off her lamps without requiring the dexterity needed to rotate the small knobs on the lamps themselves.  He was kind enough to let me pull supplies out of his junk boxes for this project, so I was able to completely do this from stock:

Parts list:
The first thing to do is to cut the chassis connector off the computer power cable.  Cut back enough of the insulation (and possibly braided shielding) to expose the three conductors.  Assuming you have an American cable, the three wires should be colored black, white, and green.  Before connecting the power cable to the switch or outlet, be sure to feed it through one of the holes in the side of the junction box.  If there isn't any holes in the side of your junction box, that's fine, just take a screw driver and MAKE a hole to feed it through.  There should be about eight perforated places where you can punch out the plastic. 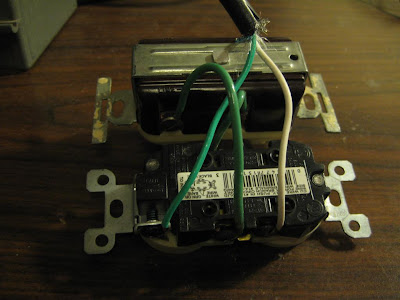 After those three wires are connected, the last thing to do electrically is to jumper between the switch and the hot (brass) side of the outlet.  I incorrectly used green wire to do this.  Luckily, this is "temporary wiring," (since it can be unplugged from the wall) so it doesn't have to be code compliant, just safe. Also, since my switch has a light in it, I needed to connect this to neutral as well, which I did with a second piece of green 14 gauge wire.

Now that we're done with the electrical part, all that's left is to screw it all down into the box, and test it (might want to test it before you screw everything it, depending on how lucky you're feeling tonight).  The main thing to test is that each of the contacts on the cable are connected to the matching hole in the socket, and that the switch turns off the right one.  It would also be prudent to make sure that the red indicator light actually turns off when you throw the switch; not that I would make such a foolish mistake as to assemble this entire project, then consider that 50% isn't very good odds on picking that direction. 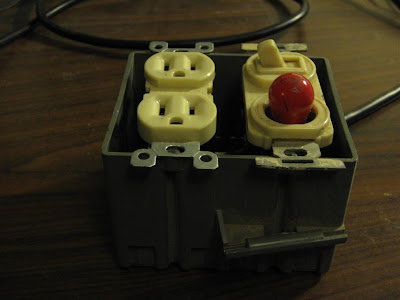 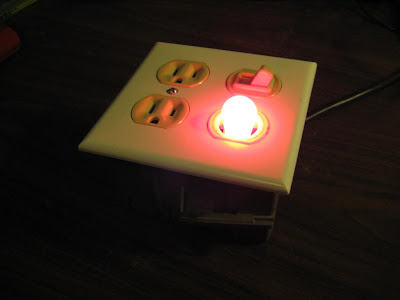 And there it is! A switched outlet, useful for anything that you need to physically remove from power, but don't want to continually unplug.

Things I would possibly change: