I don't remember how it came up tonight, but somehow I ended up looking at the pendant Drew built back in October out of UV LEDs and a uranium glass marble.  It's a very cool project, and I urge you to go check out his photos and video of it in action (and schematic!).

The electronics in it form what is called a ring oscillator.  A ring oscillator is an odd number of inverters connected in a circle.  Each inverter outputs the opposite of its input, but since there is an odd number, it's never stable, and will oscillate.  Its frequency depends on how much you slow down the signal by using resistors and capacitors.  If there was an even number of inverters, note that it would be stable, which isn't useful for an oscillator, but can be used to store information, and is known as SRAM.

Looking at Drew's schematic, I realized that with a little digging, I probably had all the parts to build the same oscillator, though with only three stages instead of seven.  I also don't have any uranium marbles or UV LEDs sitting around, so we'll have to settle with the significantly less awesome bright red.  I've tried to build this circuit before using a 7404 inverter instead of discrete components, but didn't quite grasp the concept at the time enough to get it to work. 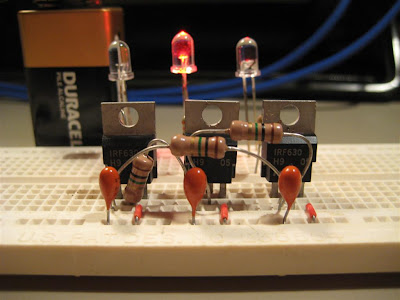 The keen eye will note that I used IRF630 MOSFETs, instead of the 2N7000s he did. This is because I tried to use the last of my 2N7000s to build it, but managed to smoke them in the process (first time using 7000s; turns out the pinout wasn't quite what I expected.). A keener reader will note that IRF630s are rated for 9 amps, which means using them to switch 15mA LEDs is some kind of silly.  They were all I had in my junk box; don't mock me. 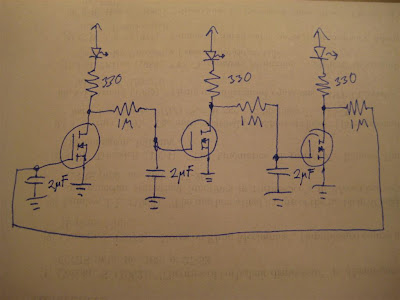 And yes, my hand drawn schematics are unfortunate, but I'm still not happy with any of the CAD programs I've been experimenting with, so it's either this or nothing tonight.