This previous weekend was crew training up at the Western Pacific Railroad Museum, so my dad met me in Davis Friday night, crashed on our futon, then 5AM Saturday morning the two of us took off for Portola.  After spending the morning sitting through the annual safety training class, I spent the afternoon getting my hands wonderfully dirty. 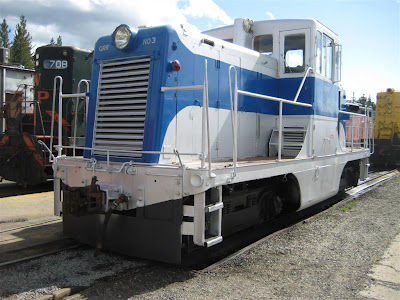 The assignment for the afternoon was to fill the Quincy Railroad #3 locomotive (museum roster page) with water and antifreeze.  QRR3 is a GE 44 Ton locomotive, which was specifically designed and built for light industrial use during the 1940s and early 1950s.  The museum is trying to get this locomotive back in service for a very similar purpose.  The lower power engines in this locomotive use less fuel than most of our larger locomotives, so to be able to use this for most of our light-service requirements will hopefully save the museum quite a bit of money.

Filling a locomotive's radiator system is much like filling the one in your car, except that everything is just bigger, so instead of buying antifreeze in quart bottles, we buy it in 55 gallon drums and use a forklift to get it into position. 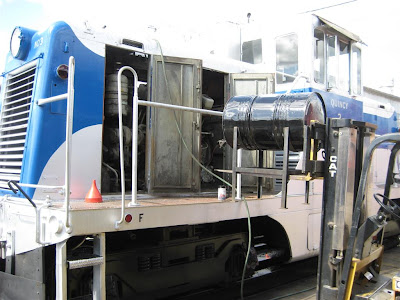 So the assignment was simple: Create a mix of 50/50 water/antifreeze such that this locomotive can be kept in service during the cold pre- and post-summer work, while most of the other locomotives must be drained of their coolant to prevent freeze damage.  This locomotive is powered by a pair of Caterpillar D17000 V8 diesel engines, so the priority was to get at least one of them operational, since even just that would be sufficient for what we need around the museum. 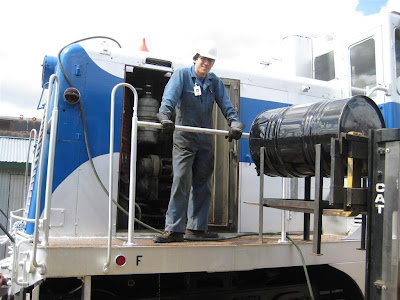 Luckily, before we started filling the radiator with $150 worth of antifreeze, we got the crazy idea of filling it just with relatively cheap water and check the system for leaks.  This turned out to be fortunate, since once we filled the radiator, the entire engine started leaking like a sieve.  The antifreeze was subsequently kept in the barrel it came in and put away.

Upon closer inspection, it appears that pretty much every rubber hose and gasket in the entire system is at least dried out, and many cracked.  All eight piston heads leaked water around the main head gaskets, which appears to have been replaced at some point with Form-A-Gasket, which doesn't bode well. 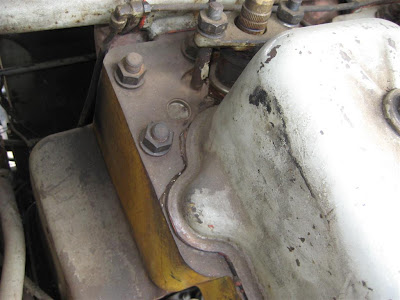 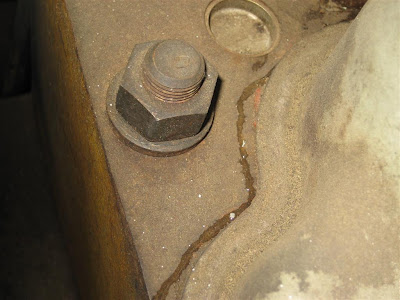 All eight heads leaked about this bad.  Might all of these leaks get better once the dried out rubber softens up? Maybe a little, but I'm afraid it's likely this engine will continue to significantly leak water until we tear down the heads and replace (and by replace, I mean actually install) all of the gaskets and replace all of the rubber hose connections.

Less fortunately, it appears that this engine suffers from an additional leak which isn't rubber-based.  On the side of the engine (below the #4 cylinder) is a heat exchanger between the water and fuel system.  Our theory is that it is used as a fuel pre-heater (does anyone have any additional information on this exchanger? Can we bypass it?).  In the picture below, it's the box below the exhaust valves and to the left of the red wire. 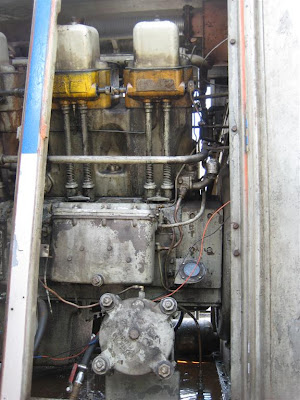 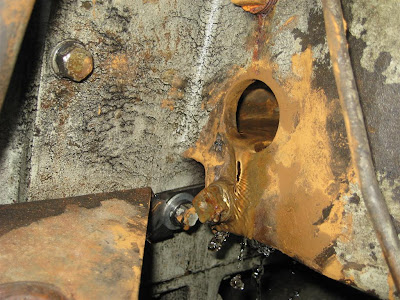 This means that as far as getting this locomotive in service in the short term is not looking very good.  With this many water leaks, running this locomotive will require refilling with water at least daily, possibly more often.  The fact that it appears that more than just rubber is damaged means that repairs will not only be labor intensive, but possibly very expensive.

On the bright side, the fact that the radiator system can at least retain some water means that we can start firing it up and look for the next set of problems, most likely in the electrical and pneumatic systems.  Please feel free to make a donation to the museum to help support this and other restoration projects which I and many other volunteers are working on.  This museum is the reason why I'm a mechanical engineer, but I can't support them without funding to buy the parts and supplies I need to move forward.

Update from Seth A (5/18/10):  "We got the No. 1 engine to fire up over the weekend. It leaks like a sieve, blows exhaust out of the crankcase breather but all in all runs pretty well. It moves too, except the batteries aren't getting a charge. And the train brakes don't respond to the regulator valve. The photo you have of the head, is actually the cylinder rocker arm cover. I didn't notice any water coming out of the head area."