This is for anyone else searching for how to solve this problem.  I bought an 8GB Compact Flash card

to use with my nice digital camera, since it only had a 256MB xD card in it.  The camera I have is a Fujifilm FinePix S7000

, which is a VERY nice camera, besides its one shortfall of being so big, which is of course also why it's so nice. 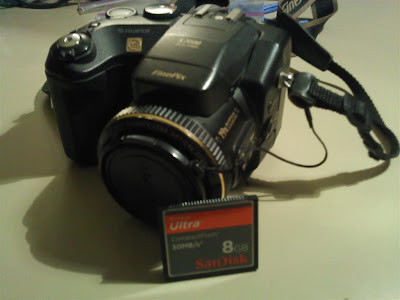 I bought the 8GB CF card without doing too much research as to if it will actually work or not with the S7000.  It turns out, at first glance, it did not.  It turns out the S7000 uses the FAT16 file system on its memory cards, as opposed to FAT32, which is what most modern SD cards and USB flash drives use.  This means that the file system on this camera can only support 2GB partitions (anyone remember Windows 95 with the hard drive split into 5 different partitions? Good times...), so the camera complains of an uninitialized card, but formatting it through the SET menu does no good.

So the problem is that the camera can't handle cards bigger than 2GB.  Fortunately, I realized that with a little partitioning magic, I could most likely trick my camera into thinking that this card really only was 2GB, at the expense of leaving the other 6GB unused, for now.

The solution I used to fix this was to pull out my trusty Ubuntu boot CD and booted it on one of my computers to use the wonderful tool called GParted.  GParted lets you edit the partition table of any storage device, which means you can destroy a lot of data very quickly, so don't say I didn't warn you.  (GParted apparently also comes on its own boot disc if you don't happen to have an Ubuntu CD laying around.)

Using GParted, I deleted the 8GB FAT32 partition, and created a 2048MB FAT16 partition.  Note that GParted will let you create a FAT16 partition up to 4GB, but anything larger than 2GB (2048MB) won't work with the camera.  Click the apply button, and you can now use the CF card in the S7000.

Obviously, this is less than ideal, since it means than you can only use two out of the eight GB on the card, but since I had no other use for the card than for this camera, its 2GB more than I had before.  If you ever end up using the same card in a more modern camera, you just have to follow the same process to delete the 2GB partition and create a new partition that is the full size.