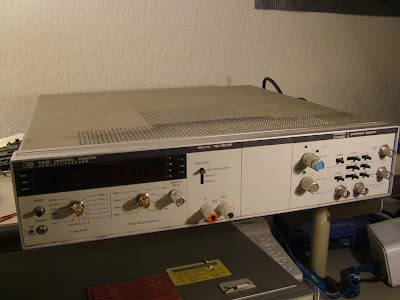 Last quarter I decided that I needed a good universal counter for a few of the projects I had in mind for this summer.  A universal counter contains a high quality time reference, which it uses to measure and count external events for you.  The simplest example is to count frequency; the universal counter resets a counter, waits a second, and then saves the value counted up to.  This count would be the number of cycles in one second, commonly referred to as Hertz.  There are numerous other function available on these, including measuring the period of a signal (which is the inverse of Hertz), measuring the interval between two events on different signals, or the ratio between two different frequencies.

Why I specifically chose the HP 5328A model was because it has a BNC connector on the back panel which allows you to feed in an external time base.  Even with a "good" crystal oscillator as the counter's time reference, you can still build a "better" oscillator by stabilizing a crystal oscillator in an oven, or even using an atomic oscillator like my Rubidium reference, which I managed to kill yesterday.

Unfortunately, while bidding on a few of these on eBay, I accidentally bought two of them. 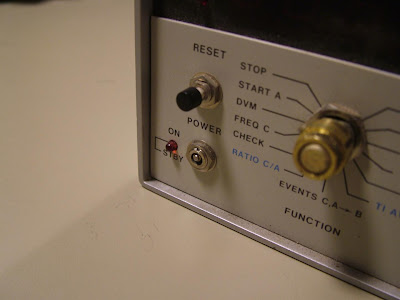 You see, one of them had a broken power switch.  A trivial fix, so I figured "meh; I'll put in the minimum bid, and then not be too disappointed when someone else outbids me." No one ever out-bid me, which I did not expect, so I got an amazing deal on this one, in addition to the moderately good deal I got on the other one (which I'll show you at the end of this post).  I figure fixing this switch shouldn't be too bad, then I can sell it on eBay as not broken, and at least cover costs.

So this simple fix to pop open the box, desolder the switch, and replace it.  Turns out, by virtue of having no idea what I was doing, I approached the problem from the entirely wrong direction. 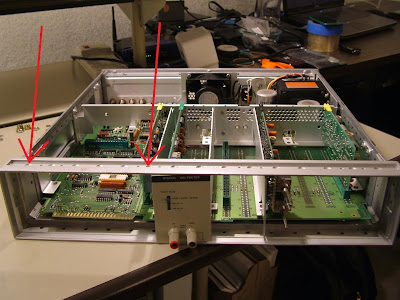 Four screws were all that I needed to take out to remove the display module...  Two of them are indicated above, and the other two are directly below them on the bottom.  Trust me, I felt very silly after tearing apart the entire tool to realize that I could have just popped out those four screws.  To make up for this silliness, I figured that while I had it completely torn apart, I may as well take some pictures of it for ya'll. 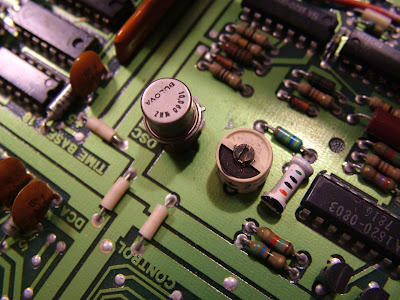 This is the 10MHz time base which the counter uses to measure everything against.  It's rather unique being in a TO-5 package; I've only ever seen oscillators in the 0.3"x0.3" square cans you see in modern equipment.  The trim pot next to it is presumably for calibration.  With my GPS receiver, I was tempted to try and calibrate it, but figured it may be more kosher to just leave it as-is and tell the next owner what its offset is. 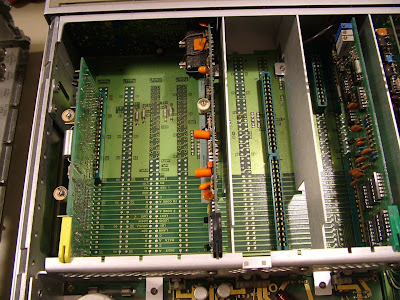 I was toying with the idea of salvaging out some of the option modules that didn't happen to be loaded in the other counter, but it seems HP went as far as not even soldering in the edge connectors for options not ordered. So much for that plan... 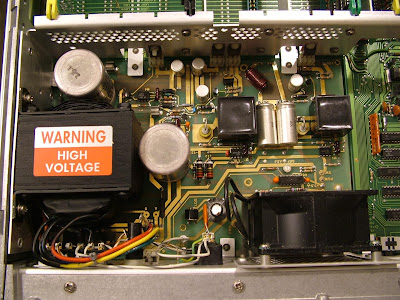 Look at that purdy power supply; gold traces and everything.  That fan is horribly loud, and if I weren't selling it, I'd probably replace it with a modern fan.  I measured it and it seemed to be a standard size, but as I now write this post I can't remember what that was... 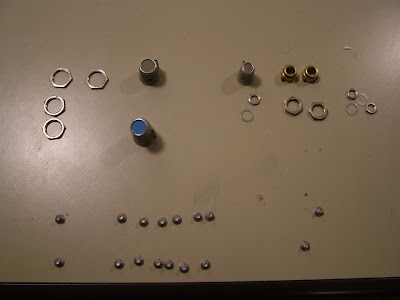 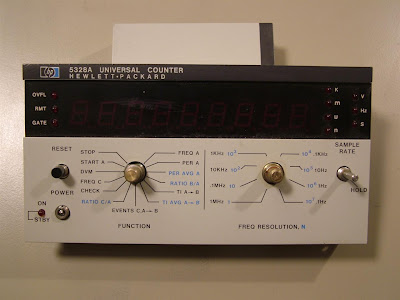 Front of the display module.  The plastic parts of the knobs are broken off as well; I didn't notice that in the eBay pictures... 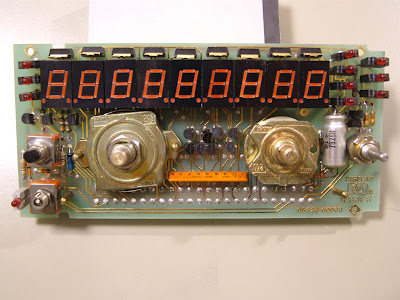 With the face plate off. Bunch of 7 segment displays in DIP sockets, and standard size switches and 3mm LEDs. 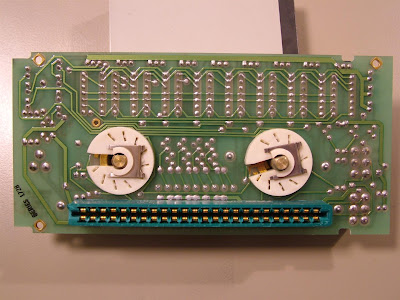 I enjoyed that all the cards were connected by big fatty edge connectors. 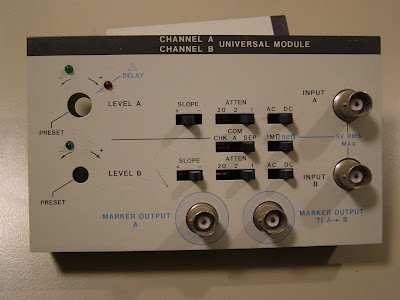 This is the "universal input module," which allows you to selectively monitor signals using either a 1MΩ or 50Ω termination, instead of only the 1M option in the standard model. It also seems to have some more intelligent circuitry as far as edge-sensing. 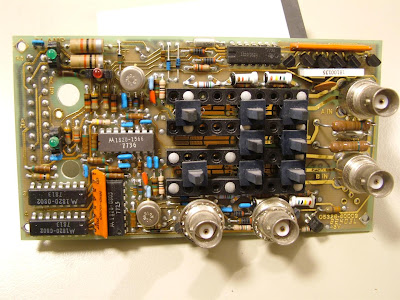 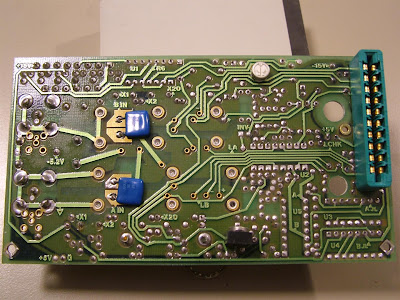 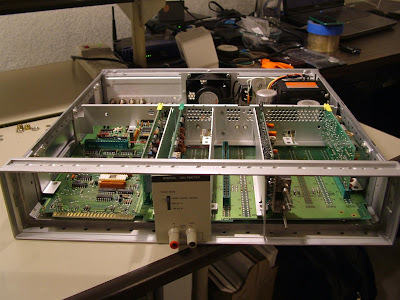 I definitely removed way more than I needed to to get to the display module... 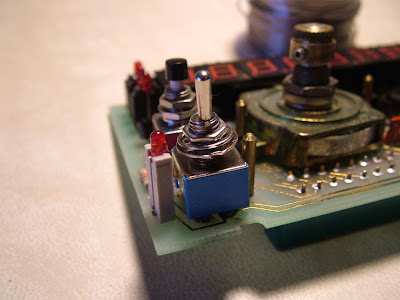 One trip to Halted with the broken part, and for $1.49 I got a close enough match to solder back in, reassemble the whole affair, and we've got a perfectly functional counter again!


Now looking at my other counter, which I did pay a bit more for, we have the amazing luck of seeing the only three options that didn't happen to be install in the first counter; the oven-compensated oscillator, the HPIB IEEE-488 network card, and the option C 500MHz channel. 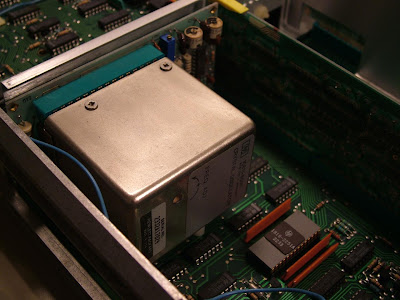 This giant silver box replaces the little TO-5 oscillator in the first counter.  What it has in it is a thermostat, a heater, and a bunch of insulation around the crystal oscillator, such that regardless of how much the ambient room temperature changes, the oscillator is always at a single temperature point, preventing the drift caused by temperature change.  The heater in this continues to run even when the counter is turned off, so I plan to make a point of leaving it unplugged until a few hours or a day before I think I'll happen to need to use this counter. 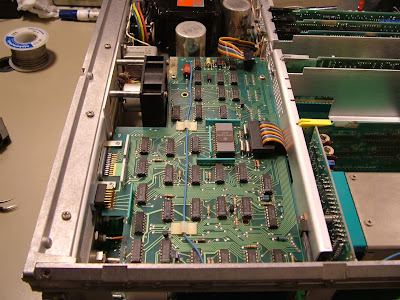 This is the network card which allows you to control and monitor the counter over an IEEE-488 bus, which is a 24 pin parallel network specification for scientific equipment.  I haven't been able to find any adapters from 488 to anything I can talk to for less than a couple hundred dollars online, but it isn't too difficult of a protocol, so I expect I'll eventually build a 488-to-USB adapter. 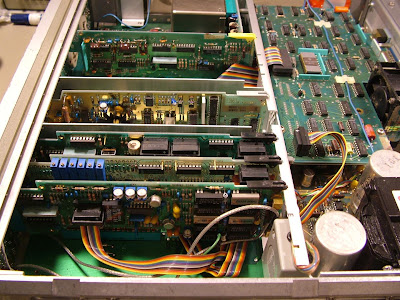 These are the channel A, B, and C capture cards, which need to feed into both the network card in addition to the local display logic.  The local interconnect is through the bottom motherboard, but the network card connections are all of the colorful ribbon cable you see. 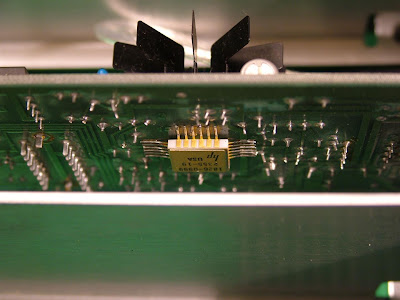 This was another relatively novel chip package I've never seen in the wild before; a ceramic quad flatpack. It's a strange surface mount package because of how ridiculously long the leads are, which were used because it made for a more robust physical mounting.  If memory serves, this package was often required in dynamic applications such as military equipment. 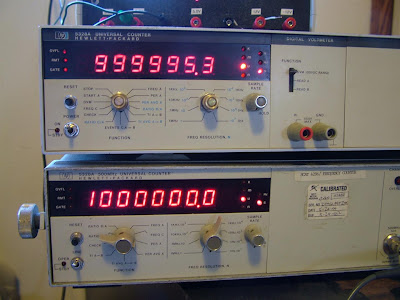 Finally, here is both of my counters measuring the same 1pps taken from my AdaFruit GPS receiver.  The lower one with the oven-compensated oscillator (which is marked as being calibrated in 1999) is spot on, while the top counter using an unprotected crystal oscillator drifts up and down 0.1-0.2ppm, and is almost 5ppm slow.  It's likely most of this difference could be removed with some calibration (or its previous owner not dropping it ಠ_ಠ), but even just watching the stability makes for a marked demonstration of the difference the option 010 oven makes.  The standard time base is rated for 2.5ppm drift between 0 and 50 degrees Celsius, where the option 010 time base has the much tighter 0.007ppm.  Since these counters display eight (or nine) digits, 2.5ppm is very visible, where 0.007ppm will at worst only effect the least significant digit.

So, if you've been pining for test equipment that typically retails for a couple thousand dollars, and don't happen to have that type of cash laying around, eBay is an option to get equipment in the $100-$300 range that at the most need some trivial TLC before being a perfectly serviceable piece of equipment.  Better still if you can either hack together or get access to a good standard to calibrate it against.