Finals are all over, and I drove home this afternoon to home sweet home. So what's the first thing I do? Re-setup all my computers, of course... 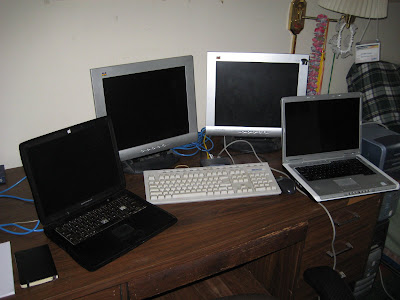 But it's actually for a good cause. My sister has a summer job working for a local daycare, so she gets to prepare lesson plans, and generally entertain 8-10 children a day while still being educational. She approached me this month and asked if it would be possible to put together a computer lab for her with all the computers I have laying around (it's a real problem for me!).

How could I turn down a challenge like deploying an entire lab of computers with Linux on them for her class, right? So I've been experimenting with how to setup the computers so it's easiest for her to supervise and the kids to use. I've finally decided on setting up one of my computers as the server, and taking the hard drives out of the rest of them and using them as thin clients. As thin clients, all these computers have to do is deal with displaying stuff on the screen, and the user typing and moving the mouse. Then the server handles running all the programs in one place and storing all the files on its hard drive. This will be really nice because I'll only have to setup Linux once, and then the desktop will be exactly the same on all of them at the same time. Then, when we want to add another computer, all we have to do is tell it to boot off the network and plug it into the network. 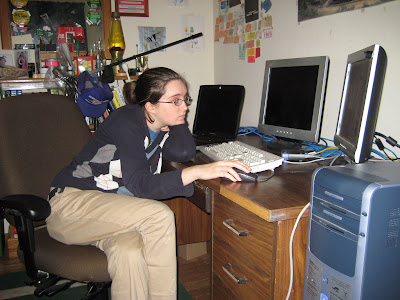 So here is Kristina trying out some of the educational games for Linux.

I've been trying to get powerpc thin clients working, but have been having all kinds of problems with it (if it was easy, would it be as much fun?). It would be cool if I did, since there is two imacs in her classroom already, so it'd be another two computers to add to my three before we have to start leaning on friends to borrow old equipment.