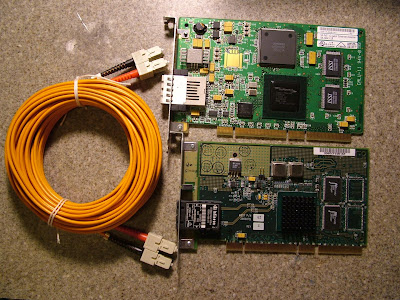 When most people think of Ethernet, they automatically think of the four twisted pair Cat5E or Cat6 cords that have become the ubiquitous solution to hard-wire networking.  For consumers, this is perfectly fine; baseT Ethernet cable is cheap, flexible, and at an effective length of 100m easily serves any of your modern household networking needs. 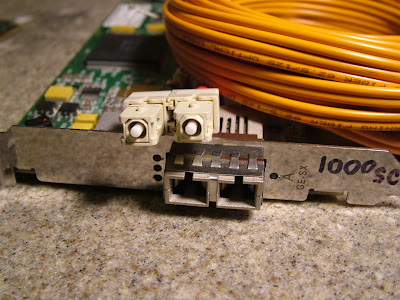 Of course, there are other variants of Ethernet.  One of these is Gigabit baseSX fiber Ethernet.  Yeah, fiber, like fiber optic cables.  SX Ethernet is a half-duplex optical protocol, meaning you need two optical fibers, but those fibers let you make a single Ethernet run on the order of 200-550 meters (which of course you can push even farther in a pinch, with luck), which make it a useful physical layer to link larger multi-building Ethernet deployments.  Of course, like all high-end computer equipment not bought by the consumer, fiber kit is typically put well outside the price range of an individual, let alone a college student such as myself.  This is where living in the South Bay and having access to surplus electronics stores like Weird Stuff is awesome.  I was recently spending a leisurely Friday afternoon digging through their $3 NIC box (as an engineer does in the Silicon Valley), when I happened upon this: 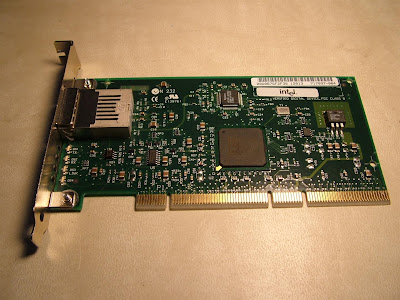 Kind of a screwy NIC... It took some deep puzzling before I finally figured it out; a fiber optic NIC, and a 64 bit PCI bus.  Most PCI cards that you see only have the first three banks of contacts you see on the left.  I had never seen the fourth bank of contacts before, but realized that I had finally managed to find an example of 64 bit PCI in the wild.  64 bit PCI was a short-lived extension to the typical 32 bit PCI before PCIe finally arrived and solved the peripheral bandwidth issues felt by PCI.  (PCIe did this, instead of widening the 32 bit parallel data bus of PCI to 64 bits, by replacing the single (slow) 32 bit bus with one or more very fast serial buses; this is why PCIe cards are so much smaller than PCI, and come in 1x, 4x, 8x, 16x variants. It refers to how many serial lanes are running, ironically, in parallel to that card). 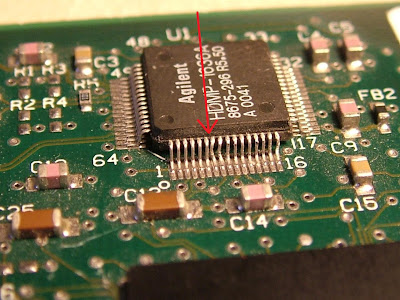 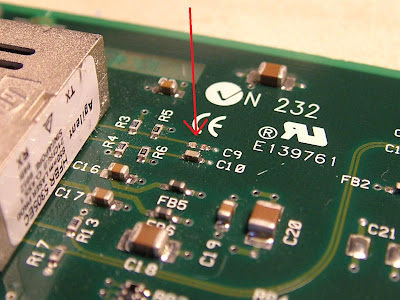 Of course, like all several-hundred-dollar pieces of equipment to be had at Weird Stuff for $3 "as-is," these did have some minor electrical issues.  One of the boards had some rather unhappy looking QFP pins, and the second was missing an isolation capacitor running from the transceiver back to the chip set.  A little tender love and care with a soldering iron and a sharp blade puts these back to right, and a $5 25' SC fiber cable put me in the exclusive "my LAN has a fiber link in it" club.

Granted, none of my computers have 64 bit PCI, so these great Gigabit NICs only get something more like 250Mb, but, should the day ever come that I need to for some reason have a decent-speed Ethernet link spanning more than 100 meters, I'm ready to go.  Are you?

While digging around for a few of these NICs in good shape, I found something on the order of nine of them.  If you're in the south bay area, and badly want or need to have a heterogeneous physical network layer, you stand a good chance of going in there and finding the rest, that I left in a neat little stack in one of the NIC boxes.