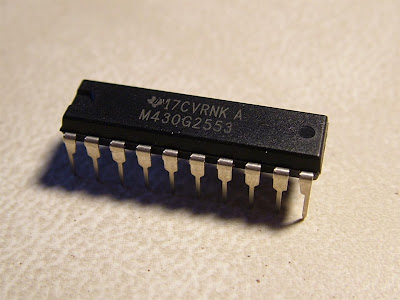 This is a little embarrassing since I do so much with Texas Instrument's kit, and even more so because I've been *using* these chips for some time now, but I just realized today that TI had finally released their third generation of their MSP430G2 value series.

The MSP430G2 series is TI's lowest cost line of MSP430 microcontrollers, which make them particularly attractive when both cost and power are important to you.  Two years ago when they first announced the value series (and the $4.30 Launchpad to go with them), they only had the MSP430G2xx1 chips available, which topped out at a paltry 128 bytes RAM / 2kB Flash / 14 pin DIP, but those came with the promise of three more generations of MSP430G2 chips with progressively more horsepower and hardware peripherals.  A year later, the MSP430G2xx2 line came out, raising the high water mark to the more comfortable 256B/8kB/DIP20 package that meant you could start doing projects more involved that simple thermostats or desk clocks out of it.

The third generation (MSP430G2xx3) has apparently been out for some time now, and I either happened to be under a rock that week, or the MSP430 community didn't get nearly as breathlessly excited about it as they did the MSP430G2xx2 line.  This pushes the G2 value series up to 512B/16kB of program space, and you can get three complete eight bit I/O ports if you're willing to finally admit the inevitability of surface mount ICs.  16kB of flash memory opens a LOT of doors for this nice little chip.  I've been cooking some projects targeting the MSP430F series, but I might be able to stick to these little bad boys now.

Just wanted to give y'all a heads up that these are available-ish.  As of right now, Digikey seems to be in their typical mediocre form as far as having new MSP430s in stock, but they'll catch up eventually, and TI of course has an outstanding sampling program.