My Summer Internship at Above The Play

Remember how, two months ago, I was champing at the bit to be done with school and planned to spend the spring and summer giving all of you my undivided attention cranking out projects and blog posts to go with them?  You may be wondering why that only lasted all of three weeks before I fell off the face of the Earth again.  Turns out, having a blog is a remarkably powerful way to get yourself employed (see: Valve hiring half of the EE blogosphere this year).  I didn't land myself a job at Valve like all the cool people, but instead have been hired by a company based in San Carlos called Above The Play.

I'm looking forward to an interesting summer. Above The Play is a fresh-out-of-the-starting-gates start-up (seriously; I'm employee #2) hoping to develop intelligent video solutions for ice hockey.  We think it's going to be possible to leverage the contemporary explosion in availability of computing power and networked video equipment to build a powerful computer vision system to track ice hockey players as they move about an ice rink.  Being able to track players throughout an entire hockey game will likely open some interesting doors as to what you could do with this information. 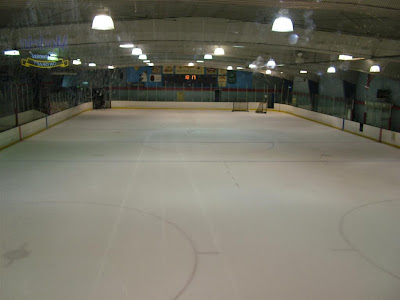 But of course, before we can start building applications using all of this information, we need to build a framework to actually collect the information in the first place.  This is where I come in, terrifyingly enough.  I was set down in front of a MacBook Air with a C compiler and an empty source code repository last week and told "go build a computer vision system."

So we'll see how that goes.  We're managed to get incredible access to an ice rink in Redwood City to develop our prototype in, so if you're in the area, feel free to drop by and wave at the ceiling-mounted cameras as you become part of my training data while you skate.  At this point, I'm only at the ice rink from midnight to 5am, which is the only time we can go out on the ice to run network cables, but once we have the hardware installed and basic software working, that will probably change, and it's likely my boss will make a concerted effort this summer to get me into ice hockey.

Strangely enough, the fact that I worked at another computer vision company last year didn't have anything to do with precipitating this; goes to show how little my career plans amount to.  I also find it entertainingly fitting that the first thing I'm doing with a BS in mechanical engineering is spending a summer coding in C.  I do get to build some mounts for the cameras, but trust me, the feeling you get when applying a college degree to 4" PVC drain pipe with a sawzall is... priceless.

Here's the bright side: my boss understands that I planned to spend the summer teaching all of you... something... so he wants me to try and write about as much of this project as is practical for a company to release online.  We're pushing some interesting limits on this project, so here's to hoping I can find the time and energy to not only write about it, but convince my boss to let me publish it (it's a little sticky writing a contract where both he and the Internet get the IP, when only one of them is giving me money for it).  I'm not too worried; he seems like a pretty cool guy.

Here's the down side: I didn't get this job until after I had already registered for Maker Faire, HOPE, SEMICON, a tour of the Titan Missile Museum, etc., so my summer is ironically now OVER-subscribed.  This job will undoubtedly make for some very interesting blog fodder, but the start-up life may not lend itself well to me juggling other projects much.  They sadly return to their rightful place on the back burner.

So that's what's going on. You may find my twitter feed more entertaining, since I use it to break up the rest of my days spent writing C daemon code, and it's a lot less work than blog posts.  If you're going to any of the same conferences as me this summer, feel free to track me down and say hello; I'd love to meet as many of you in person as I can before school starts again.

And yes, that is in fact four o'clock in the MORNING.  My sleep schedule is already pretty much hosed, and it isn't even June yet.  We're trying to find a good compromise between operating on Pacific time and Hong Kong time.