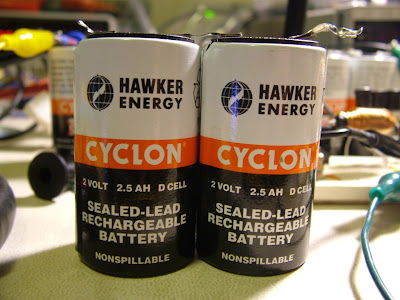 During my south bay salvage crawl on Friday before Maker Faire, I managed to score a good deal on D cell sealed lead acid batteries. These are interesting because the only way that you usually see lead acid batteries is the "flooded" ones in your car, where the cells have caps on the top and you can actually open them and interact with each cell's internal chemistry.  Flooded cells are great for installations such as cars, UPSes, etc, but are useless for more dynamic projects for lack of my interest in dumping sulfuric acid all over myself (fun fact: I've actually done this before). 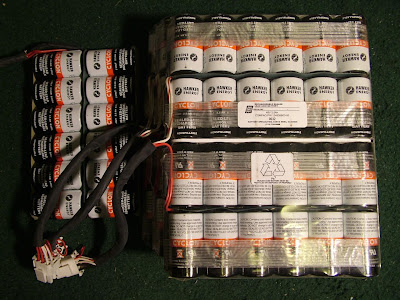 Seriously; a REALLY good deal.  I got 100 cells for literally nothing more than a song and having to haul them away. These came as 48V packs originally used in telecom UPS for phone systems; these are why you always want a wired phone on your phone line (for what few of us even have those any more), since phones don't fail when your power goes out.  But, like most good deals to be had on salvage crawls, this one came with a little hitch; these batteries are dead.  Dead-dead.  Not the 10.5V won't start your car dead, but 30mV per cell, cold-death, sitting on a shelf for decades, chemically inert dead.

The party line when you run into lead acid batteries in this state is "they're dead; put them down and walk away,"  Of course, being a college student, I find myself time-rich and cash-poor, so trying to bring these cells back to life and identifying which ones are beyond saving is nothing more than a challenge.  I've previously participated in trying to restore much larger flooded lead acid batteries (each cell larger than a breadbox), but I figured these D cells may be more apt for personal exploration in the subject, since they lack the ability to be used to arc weld with.  I've got a line on a set of standard traction batteries in about the same shape as well, so if this project seems successful, I will eventually be able to move up in scale.

Now let's take a moment to talk about lead-acid battery chemistry.  Wikipedia does a wonderful job of explaining the whole process, but it primarily comes down to this: given two plates of lead (one of elemental lead, the other of lead dioxide PbO2) in a bath of sulfuric acid (H2SO4), the sulfate ion bonds with the elemental lead, releasing electrons into the metal plate and protons into the acid bath in exchange for becoming PbSO4.  Wandering over to the other plate, PbO2 pulls electrons from inside the plate, and trades another sulfate ion from the acid bath for its oxygens.  This forms even more PbSO4 on this second plate, and generates water between the oxygen and loose protons.  The fact that this chemical reaction punts electrons from plate to plate is why we find it so useful, in exchange for converting both plates into lead sulfate and the sulfuric acid into plain water, which also provides an easy way to measure the charge state of the cell via the state of sulfuric acid to water transition (about a 20% density change).

In the ideal world, recharging the battery is the complete opposite; drive electrons backwards from plate to plate, cause sulfate to migrate back into the water, and break apart water back into acidic protons and PbO2.  Hopefully by this point in your life, me pointing out that the world is far from an ideal place isn't a particularly contentious issue.  This concept works well as long as the battery is only kind-of discharged, but starts to fall apart as soon as you're talking about very dead cells.  Let the battery go too dead, and the lead plates will consume all of the sulfuric acid, and the PbSO4 will become very strongly bonded.  Come back too late with your offer to trade the sulfate a lousy proton for his lead, and he might actually turn down the offer.  Suddenly, you've got players not willing to participate in the game anymore, and your battery starts to look like it's a hockey team with some anger issues and half the team sitting in the box.

Not only does the total battery capacity go down, but the internal resistance of the cell goes up.  Typical lead acid cells have internal resistances measured in the milliohms.  Let them discharge too far and that figure will start creeping up into the ohms range.  Taking one string of these D cells at random, I measured an internal resistance in the hundreds of ohms, so these are irrefutably dead.


Than again, just because this lead sulfate doesn't want to participate doesn't mean I can't try and use some force to try and coerce them.  Higher charging voltages applied to the cells will more forcefully drive sulfate back into the electrolyte, making them available again for storing energy.  The problem is that apply a higher voltage means applying more power to the cell.  Apply too much power to a flooded cell, and you'll start to electrically break down water into gaseous hydrogen and oxygen, causing an explosion hazard (which is why you need to make your fourth connection away from the battery when jumping your car; sparks + H2 + O2 make for an exciting evening).  Apply too much power to a sealed cell like these, and being unable to vent the gas, they build up in pressure, before first rupturing, then likely also exploding, causing death, destruction, etc etc.

In any case, applying this excessive power doesn't seem to be the way to go.  If only there was some way to apply a higher voltage without apply more power to the lead acid cell... 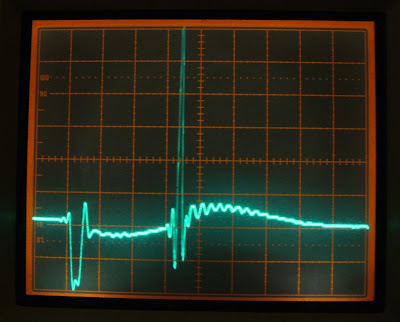 Well now would you look at that... Scale settings are 0.5us per horizontal division, and 5V per vertical division, so you can see the cell sitting at ~11V, drop down to ~0V, then get kicked back with ~40V for a very short (~100ns) time.  Suddenly, we've got the much higher voltage we need to break apart very comfortable PbSO4, without the excruciating explosion and death problem caused by excessive power.  Clever trick, but I'm not as quick as I used to be, so trying to manually apply 100ns pulses to these batteries would be error prone, and frankly, incredibly boring. 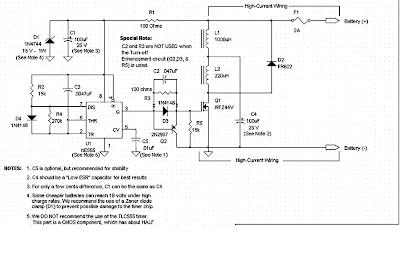 Enter the timeless 555 oscillator and an inductive charge pump, found online here. The 555 quickly switches on and off a high power MOSFET, which causes current to flow through the large inductors before turning them off so fast that the current turns into a large voltage spike, which is fed back into the battery through a high current diode. 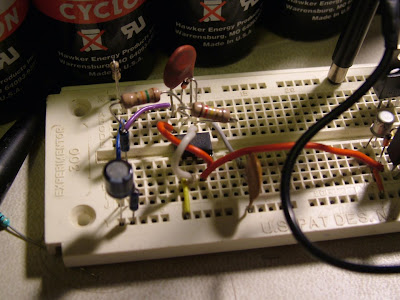 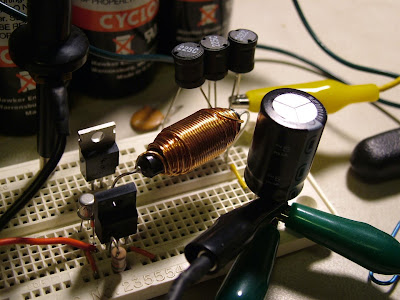 Granted, I built mine from what I happened to have on hand, so some of the component values aren't particularly optimal, but for a first trial it's showing some promising results. 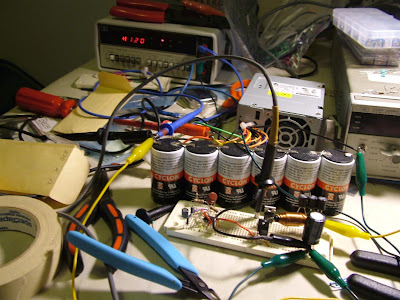 Running a string of six of these D cells over night with this pulse conditioner, the internal resistance of the string went from about 500 ohms down to ~15, and the current drawn from a 12V source went from 50mA to 0.3A.  Granted, some of those results are from simply charging the cells at all, but initial qualitative observation has me thinking this helps, and once I finish purchasing a real lab power supply this coming week,  I'll be able to make more quantitative comparison between sets of strings, since I have 14 more 12V sets I haven't even touched yet.

In all honesty, pulse conditioning sealed lead acid cells isn't entirely kosher, so don't take my experiments here as much prudent.  I spent a very long time considering exactly how hard I was abusing these cells before I was willing to run it unsupervised, and unsupervised they will need to run; pulse reconditioning is a process measured in a timespan of weeks for typical cells.