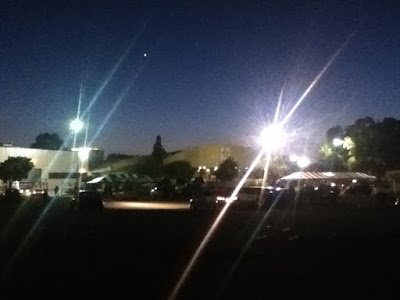 I just spent a simply unbelievable weekend gallivanting around the peninsula with a multitude of my Internet friends, for Maker Faire and the pleasure of being surrounded by incredibly smart and creative individuals.

I didn't even bother trying to take good pictures of the whole affair, because pictures and video just never seem to capture the tremendous scale and energy of the entire place.  I did snap some quick iPod photos, but simply because by the end of four days (!) I knew I wasn't going to remember half the places I went or saw, or people I met. 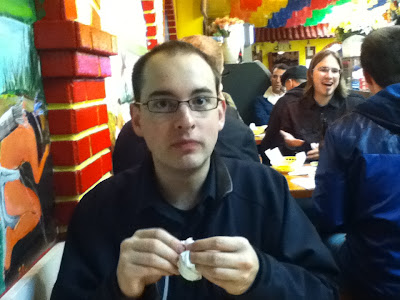 Maker Faire for me started Thursday afternoon, when I caught a ride to San Fransisco with Jaren Havell.  He, Chris Gammell, and Jeff Keyzer rented a house in Berlingame, so I came as their fourth. Saving me from the 30 minute drive from the south bay was surprisingly helpful by the end of the weekend; I'm not sure I would have been able to get myself out of bed Sunday morning without my ride having to be there on time. 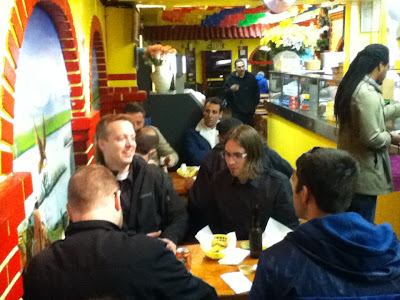 Jaren and I drove into San Fransisco for Dangerous Prototype's San Fran taco crawl.  Ian had us all meet in the Mission district, and we promptly made our way from taco stand to taco stand.  The tacos were amazing. 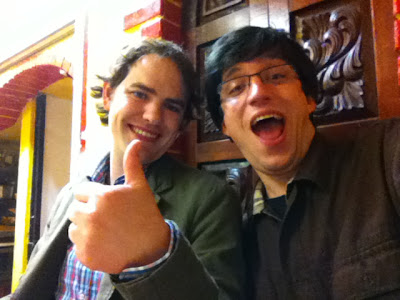 The first of the two priceless moments this weekend was Ian over-hearing me introduce myself to someone else in the group, make a double-take, and exclaim "Wait, are you THE Kenneth Finnegan?!?" He was very excited to finally meet one of his "premier free PCB builders," and we had a good time talking about the challenges of SMT kits and about off-loading a few product ideas I've had onto DP's fulfillment chain.


Friday started out with my salvage crawl, where everyone met at Halted at 10:30AM and we made the rounds of the south bay electronics stores.  Attendance wasn't nearly as impressive as Ian's crawl, but we ended up with a reasonably-sized group.

I didn't take any particularly interesting pictures, since I can guarantee you that you can walk into Halted, Weird Stuff, or HRO any time you like and they'll still look pretty much the same.  I came back from the trip with a few connectors and fuses I need, a pair of databooks I'll find useful, a $25 kiosk computer (with decent legs; P4 3.4GHz Cedar Mill with 1GB of DDR2 RAM), and ~100 D cell sealed lead-acid batteries. 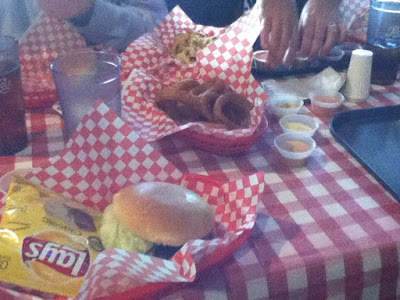 We of course had lunch at St John's.  My burger was just as satisfying as I hoped, for the end of an outstanding day buying e-waste. 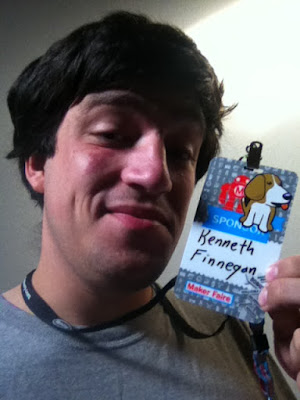 After the salvage crawl, it was off to the San Mateo fair grounds for everyone else to set up their booths.  I wasn't officially signed up for any booths this year, but managed to sneak in long enough to find some people I knew at Texas Instruments.  They were having some mechanical issues with their booth, so I ran to the nearest phone booth, changed into my "Mechancial Engineering Man" cap, horse-traded with Radio Shack for a toolbox, and managed to get all of TI's defective booth props put back together in time for Saturday morning. 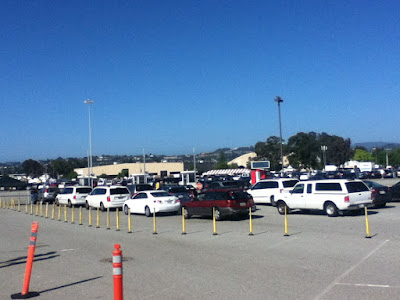 Saturday morning found us at the fair grounds bright and early.  Even an hour before the 10AM gates opening, at 9AM there was already cars and people lined up around the block to get in.  I checked in at TI's booth and helped them artistically stack Launchpads, but found myself with a spare 30 minutes before 10AM.  All of the makers were mulling around checking out each others booths, since this was going to be the only respite they'd have before two full days of desperately trying to keep their booths running. 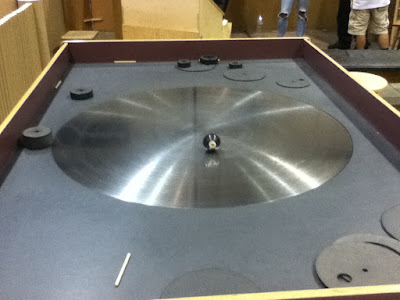 I used this chance to sneak into the Exploratorium booth, and had a once in a lifetime chance to play with the spinning table exhibit for a glorious 20 minutes of spinning harmonics without any small children forging paths of disc destruction through my experiments.  Priceless experience number two.  Once the gates opened, the crowds started to become difficult to navigate almost immediately.  It's amazing how much of Maker Faire you can cover from 9:40AM-10AM when you can move between booths at a dead sprint.

I ran into Thomas Wilson, one of my friends from the UCD MechE dept, pretty early on in the day, so being able to spend the morning with a second person to pivot the crowds off of made the day much more enjoyable.  This was his first MF, so to have someone there to drag him around until 2PM to give him a birds-eye view of what to go back and spend more time at was hopefully helpful for him. 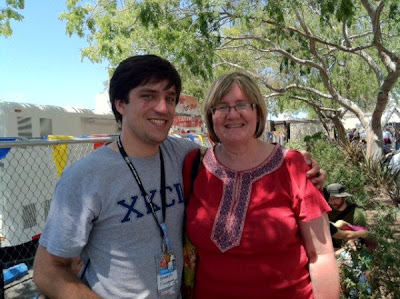 I ran into my best friend's parents Saturday during lunch, in addition to countless other people I knew either locally or from online.  I can't express how much I enjoyed meeting all of you in person who came by and said hello. 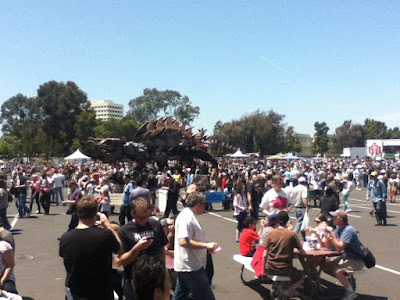 By 2PM, the crowds were getting even nuttier than before, and I had finished a satisfying first-pass through the Faire, so I decided to go back and drop by the TI booths and see how they were doing. 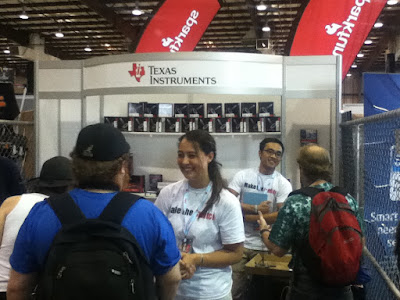 They were very happy to see another face willing to help them go toe-to-toe with an endless swarm of people wanting to hear about Texas Instrument's microcontroller platforms.  Since they had been nice enough to get me a sponsor's badge, it was the least I could do. 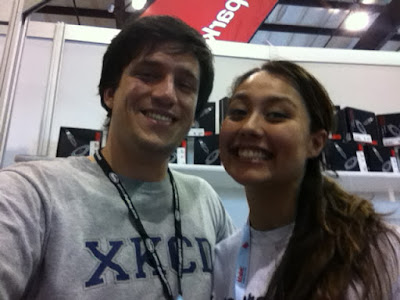 Larissa from TI and I have been emailing back and forth for some time now, so it was nice to finally put a face to one of my industry contacts.  Adrian (of Launchpad unboxing video fame) and Gerard from 43oh were also there. 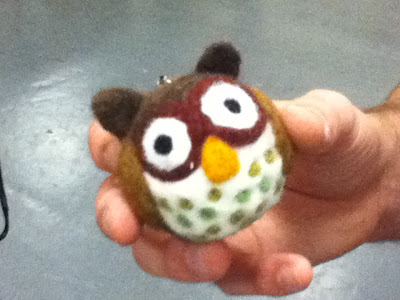 Sunday was more of the same.  I took advantage of the first few hours of thin crowds to cover some more of MF, including a needle felting booth making some very adorable felt dolls. 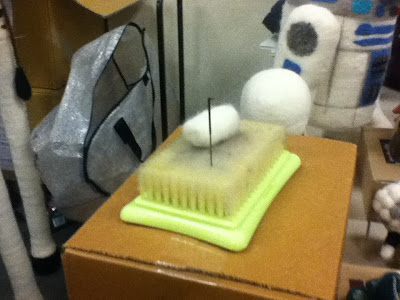 Needle felting is where you take a barbed needle and colored wool, and use the needle to tangle the fibers to make the more solid felt texture you typically only see in flat sheets from the craft store.  I thought it was very clever that they used soft brushes as a work surface for the felting. 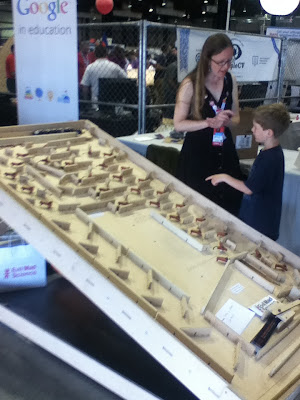 I ran into countless makers I knew personally throughout the weekend, both those local to the bay area and those from all over the world; for how wide spread we are, makers really are an incredibly tight-knit community.  Evil Mad Scientist Labs was there again with their amazing Digi-Comp pool ball ALU.  Watching kids get excited about adding two numbers together was pretty precious. 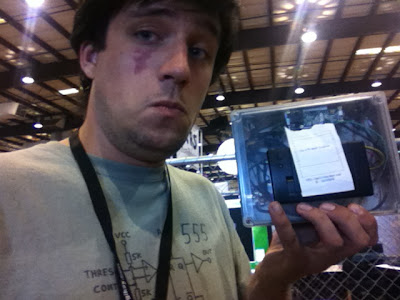 I won't even try and list either everyone I met or everyone I tried to find and missed; both lists are tremendous.  I did think it particularly unfortunate than I spent more than half of MF working the TI booth, and STILL didn't manage to meet Matt Richardson, of Beaglebone-powered Descriptive Camera fame, in person.  I even tried to describe pictures before the MF network went into total congestive collapse (Internet inside the fair lasted all of about 45 minutes Saturday morning before going down for the rest of the weekend). 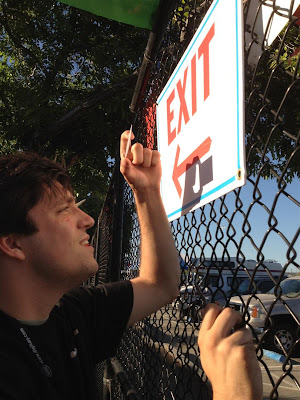 While packing up the TI booth Sunday night before Jeri's Hacker Meetup, there was the entertaining distraction of the solar eclipse, so Larissa and I went outside to watch it.  The Exploratorium was handing out shaded glasses, and several people had brought viewers, but for the sake of avoiding the crowds we managed to jury-rig a surprisingly effective viewer using a business card and my Leatherman Micra. Thanks to her for the picture. 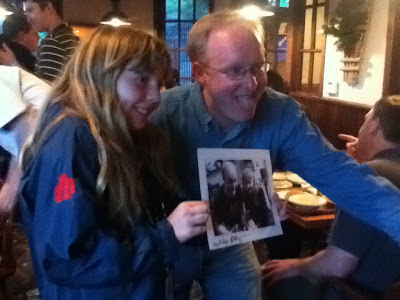 To wrap up this very long weekend, Jeri had us all take over Harry's Hofbrau, which was pretty entertaining.  You put 100 makers in pretty much any public institution and silliness will commence.  Sylvia and Ben's meta photo repeating last year was but one of the multitude of stunts being pulled that evening. 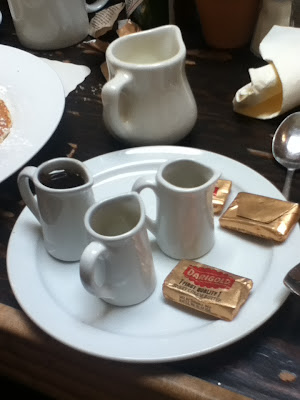 Jaren and I finally woke up Monday around 11AM, and after enjoying breakfast at an adorable cafe in downtown Burlingame, we decided to finally actually spend some time in the BnB that we rented for the weekend, so we spent the afternoon writing an Arduino library for the TMP421 chip.

Over-all, this weekend was AWESOME.  Many other blogs actually made an effort of trying to capture the sheer volume of creativity flying around (example), so I urge you to go read them as well, but if you're not already penciling out the weekends for May, 2013, you better get on it!  Maker Faire is amazing, and easily worth the trip from WHEREVER you happen to be in the world.


A few post-op pointers in no particular order: