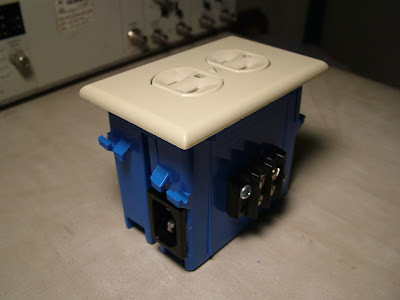 I've written about these in the past, but this is probably the switch box that I am the most happy with.  This is a simple plastic electrical gang box, with a solid state relay inside of it, such that a lowly microcontroller can switch relatively high current 120VAC loads.  I've used these to control all of my apartment's lights, as well as to control a 600W hot plate.  After making a few, I did get kind of tired of each one having a power cord permanently attached, which gets annoying when your storing these between projects. 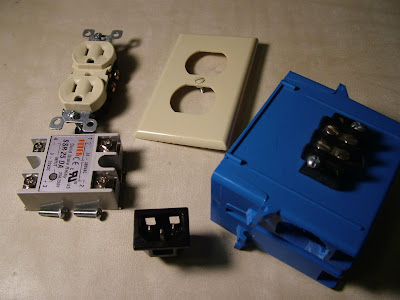 I decided to convert all my switch boxes to have IEC connectors, which are more commonly known as "Computer cords."  Almost all computers use IEC power cords, but also most benchtop measurement equipment, and a few other random devices.  Using an IEC power cord is nice because it allows you to separate the cord from the device for storage or replacement of either the cord or piece of equipment. 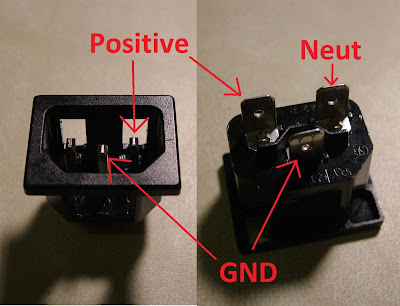 I got some panel mount IEC connectors from Halted with 0.25" spade lugs on them.  These originally have three tongues which are meant to snap in when it is pressed through a properly sized hole, but the gangbox plastic happened to be too thick for them to engage.  Since they couldn't engage, they kept the female IEC connector on the cord from fitting, so I snapped off the tongues, which is why there are three odd windows in the side of the connector.  I used some hot-melt glue as strain relief instead. 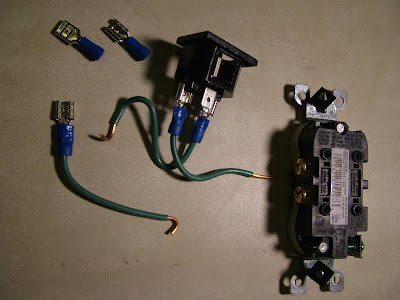 Precutting and bending the wires to connect the IEC connector, outlet, and SSR is somewhat of an art form, since trying to adjust anything inside the gang box gets cramped very quickly. 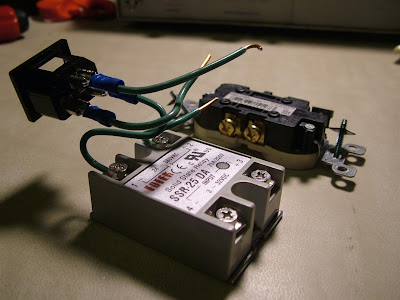 Of course, you should use properly colored and gauged wire when wiring 120VAC equipment, but I somehow ended up with 500' of 16 gauge wire, so I'm using it anywhere I can get away with it. 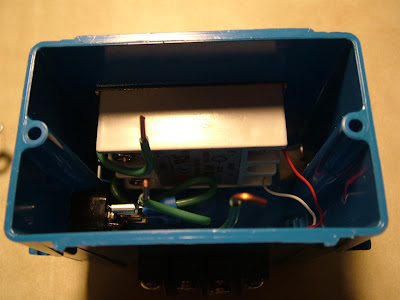 Hella cramped.  I connected the hot and neutral using the punch-through connectors on the bottom of the outlet gang, but you are free to use the traditional screw terminals on the sides.

And there you have it.  A real quick and easy box to drop into any project where you want to control Christmas lights, a lamp, or a small heater.  The SSR takes about 10mA at anything from 3-32V to switch on.  Although the SSR is rated for 25A, you really don't get to use that much.  Considering the other components I used, I wouldn't push it much above 10A, and as Phil in the comments reminds us, SSRs do dissipate quite a bit of power.  If you go as high as 10A, you only get to pulse the load (like I've done before), so don't hook this up to your space heater and then act shocked (hahaaa) when your junction box literally melts.  If you need to handle more power, find yourself a good heat sink for this bad boy.

Surprisingly cheap, as well:
Repeat after me: "I will not kill myself with 120VAC, and if I do, it isn't Kenneth's fault."