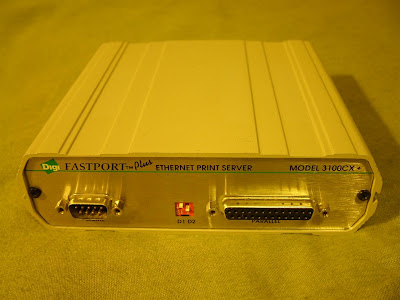 After trying out the 86BT in my parent's house as their network printer solution, we were a little underwhelmed with the build quality of it.  The BT86 is certainly functional, but its build quality is pretty unimpressive and didn't instill much confidence in the parents.  All the well, because it means I get to keep playing with it, but it means I still needed to find an Ethernet solution for the parallel port printer. 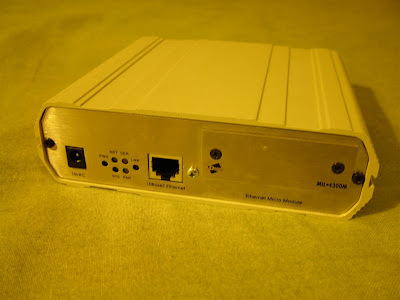 I managed to get a good deal on this beautiful piece of work, a Milan FastPort Model 3100CXPlus print server.  This thing is built like a tank, and taking numbers.  The case is made from heavy extruded aluminum, and is about the most solid thing piece of electronics I've ever played with.  It was originally made for corporate networks back in the late 90s.  This specific device has a firmware build date from 1997, so it's OLD, but still working.

It's a very simple device; an Ethernet jack to plug into your network (10bT, amusingly enough), then a DB-9 serial port and a DE-25 parallel port to plug printers into.  What is a little squirrely about it is that it has two DIP switches on the front to switch it between a couple modes, and of course the user guide for it off-handedly mentions that specific switch settings can be referenced from the installation manual, which is nowhere to be found online.  It then exposes these two printer ports as TCP sockets, which can be set up as RAW TCP/IP printers on any operating system. 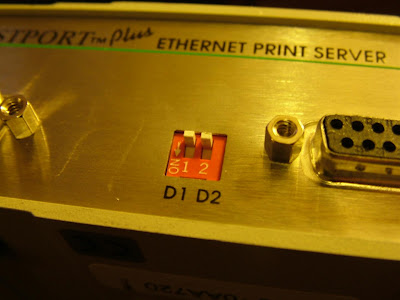 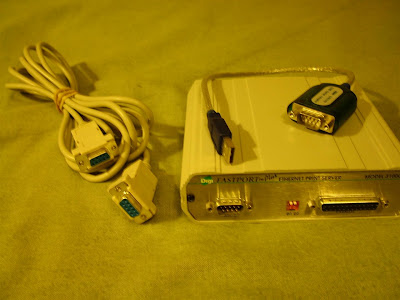 So, for example, setting the switches to on and on, and then plugging a null serial cable into the serial port to your computer, and opening a hyperterminal at 9600 baud brings up a menu system to configure the device.

Setting D2 to off and power cycling the device causes it to try and print a test page on any printers plugged into it (using what looks like basic PostScript, but having never looked at PS before I am only guessing).  Of course, our Laserjet 2300 is a PCL printer, so the test page mode did nothing.

To then set the device into standard print mode, turn off D1 and turn on D2.  I never figured out what off-off did.  In addition to exposing the two printers on ports 2000 and 2001, you can connect to it through telnet on 2002, and either monitor status or remotely configure it exactly as done through the serial port in configuration mode.

So of course, while I was playing with this, I had to open it up and check out some good 1997 circuit board action. 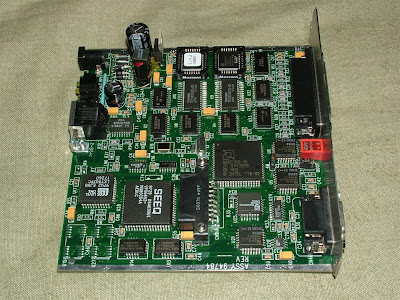 There were a few things distinctive about this board.  First of all, it's the first PCB I've ever seen designed to slide straight into an Aluminum extrusion case.  Second of all, it actually has two banked EEPROMs for the firmware, which are the two PLCC ROMs at top center.  This means flashing new firmware actually requires booting off one bank, flashing the second, then rebooting off the second bank to flash the first.  Talk about a robust system!  You'd have to really work at it to brick this thing. 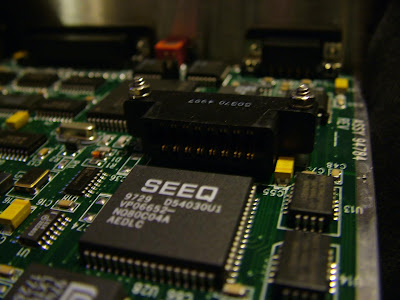 Third feature of note is the 16 pin edge connector inside for a daughter network card, which can replace the blank-off cap seen to the right of the Ethernet jack in the second picture from the top.  This allows you to buy additional network cards to allow this thing to support any of the dizzying array of network solutions eventually beat out by twisted pair Ethernet, including coax Ethernet, token ring, and AppleTalk.  Again, impressive. 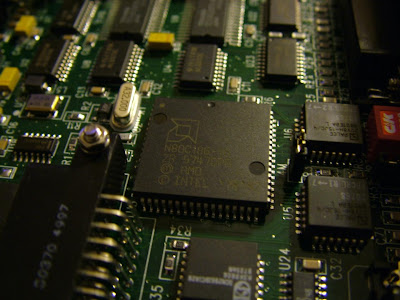 On top of everything else amusing about this thing, the microcontroller running the show easily takes the cake.  This thing runs on a freakin 80C186, which was one of the stepping stones between the classic Intel 8086, and the 80386, which defined the entire PC revolution.  Not only is this a classic controller, but back in the 90s it was common practice to license your ICs to other companies as "second sources" such that manufactures would be willing to use your part (since they can buy it from either you or your licensee).  The 80C186 was developed by Intel, but this one happened to have been manufactured by AMD, which can be seen by the (M) AMD (C) INTEL silkscreen, which is quite rare now.

So, all being said, this is an amazing device if you still happen to be using a parallel port printer that you want to put on the network.  The 10bT Ethernet isn't much of a limitation, since parallel ports are slower than that anyways, and it handled multiple computers simultaneously trying to print to it no problem.  If you happen upon one of these things at any kind of salvage shop, or on eBay selling for a lot less than the $100 they seem to be going for these days, grab it.

Edit (7/1/2013): I did eventually manage to find a user's guide for the Milan FastPort series on their website.