Monitoring an Oven with the SerialCouple 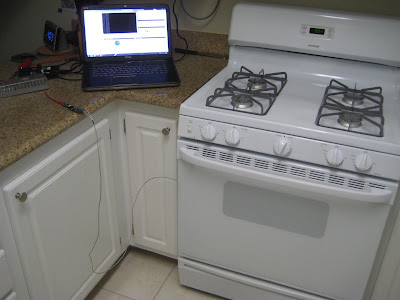 Progress on the SerialCouple boards has been coming along.  I think I've identified all of the hardware issues, so now it's just a software problem.  I decided to have some fun with the prototype today and have it monitor my oven while I baked a batch of brownies.  The SerialCouple boards are rated for the entire K type temperature range (-200C to 1350C), so the only limiting factor as to how hot you can measure is the rating of your thermocouple. 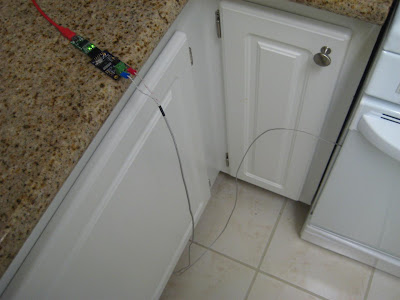 My new roommate happened to walk in on me setting all of this up.  That was a rather amusing conversation...  Luckily, she's learning pretty quickly to tolerate my eccentric hobbies, which I appreciate.

I had a little difficulty installing the thermocouple, because some parts of my oven door are grounded, which causes the ADC to issue a fault code, but using a non-metallic sheathed thermocouple, or in my case finding a non-grounded section of the door fixed that. 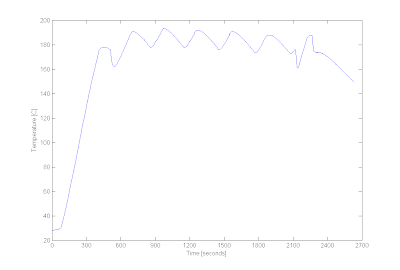 I generated the graph by having PuTTY log the serial port to a file, then imported it into MATlab and plotted it to a png.  Pretty simple, but I have visions of eventually writing a proper DAQ interface for the SerialCouple, likely in Java.

Looking at the graph, you can see that I added the brownies at the 8 minute mark, checked on them at the 35 minute mark (2100 seconds), and declared them finished and turned off the oven at 38 minutes.  The oven temperature was set to 325F, so it does seem to run a little hot.  When baking, I would typically let the oven pre-soak a little more before adding the brownies, but I was in a rush for some baked chocolate deliciousness today. 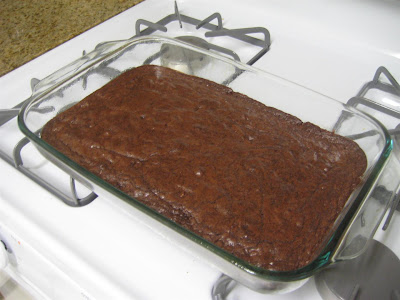