The Western Railway Museum (not to be confused with the Western Pacific Railroad Museum which I also volunteer at) has track work weekends twice a month, where we go out and do maintenance work on the several miles of track that the museum has in service.  A typical Saturday consists of driving a few miles down the line and replacing every other tie under the track (which I have written about previously) or straighten and repair rail joints.  This was certainly not a typical weekend.

The old Sacramento Northern line that the museum runs on has a number of trestles originally built in 1939, which inevitably need to be maintained.  The project this weekend was to replace the center bent, which has been suffering from being in standing water, so we were to replace it with a shorter bent, and pour a new concrete cap on top of the old foundation to keep the wood from sitting in the water that collects underneath the bridge.  Joel had already staged the new bent to the left of the old one, the concrete frame and forms on a flat car on the bridge, and jacked up the bridge. 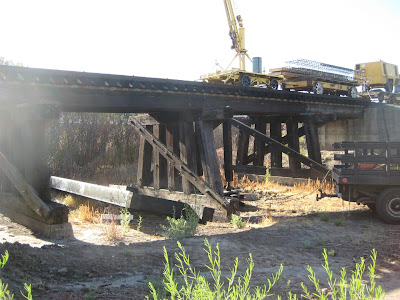 First thing to do was to cut out the old bent.  This was done with a sawzall powered from a diesel generator, while the top cap was held in place by the tie crane on the bridge. 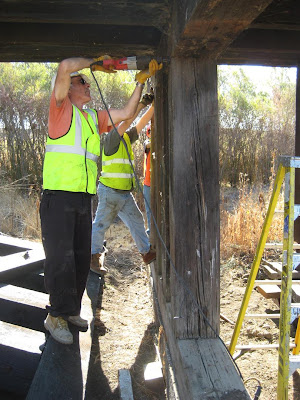 Once the legs were cut out, we lowered the top cap to the ground. 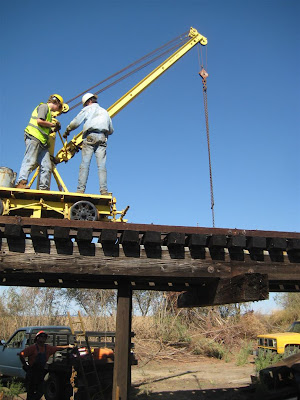 We found a few of the original 1939 date nails in the lumber we were tearing out, so we pounded them into the new bent, for "historical accuracy."  It hurt the engineer in me a little to improperly date-mark the timbers, but I've already got a 39 nail from the last time we replaced ties, so it seemed like the best thing to do with them.  They were in surprisingly good condition for 72 year old nails. 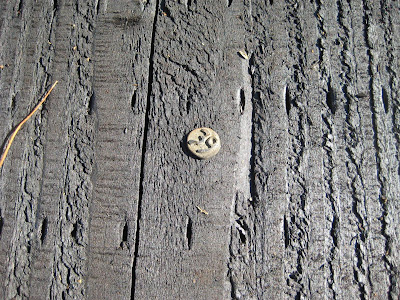 Some of the nuts were so rusted onto the bolts in the old bent, it was twisting the wrought iron bolts that finally broke, not the stuck nuts. 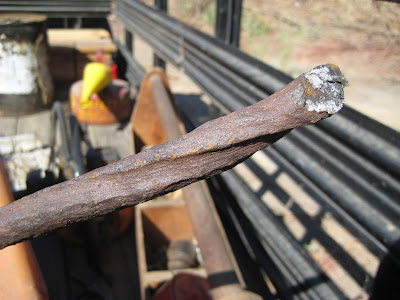 Once we had the old bent out, we cleaned up the old foundation. 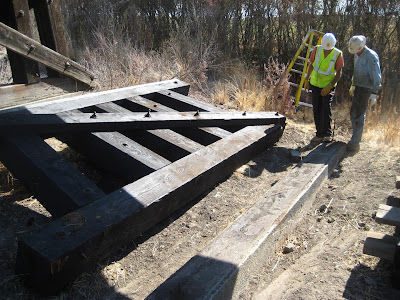 We then took the new concrete cage and lifted it into position. 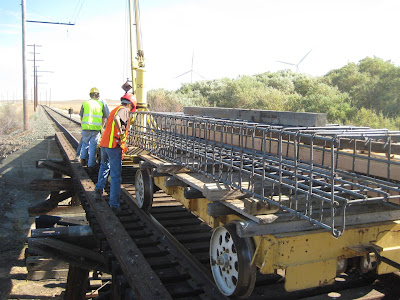 Getting a concrete contractor to come out on a Saturday was going to be an ordeal, so we only framed it all up such that we could have someone come in Monday to pour it for us. 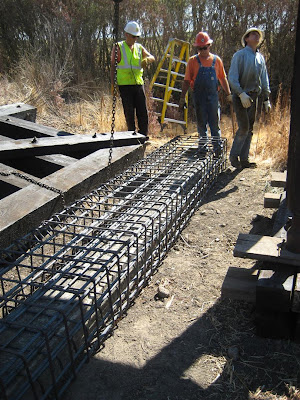 We then used the crane to lift the new bent into position, and bolted it to the 16" stringers to hold it in place until the concrete can be poured. 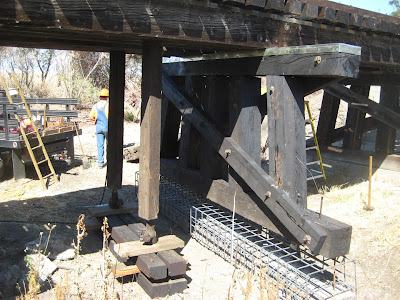 Once the bent was bolted in place, we took a break for lunch, and then installed the concrete form for the new foundation cap. 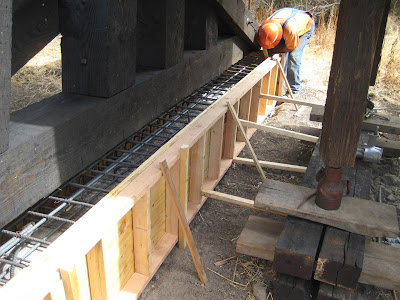 Everything went extremely well, which is mostly thanks to all the hard work Joel put in beforehand staging everything.  Since the new bent is a foot and a half higher, hopefully the new lumber won't sit in water and rot out like the old one.

It was a fun day.  I keep trying to get down to Rio Vista more often, since they work every second and forth Saturday, but college keeps getting in the way.  Hopefully I'll have more time this year to work there.  If anyone in the Sacramento area would like to get involved, email me and I can put you in touch with Joel, who is in charge of the track crew work weekends.