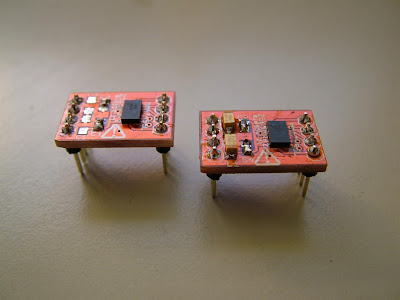 The Dangerous Prototypes' free PCB builds continue.  The latest, of the few, is a breakout board for the MMA7455 MEMS accelerometer.

These things are HARD to solder.  Or more accurately, these things are very non-intuitive to solder, but go together like me and chocolate once you figure out the trick.  The problem is that the chip has FOURTEEN freakin pads under that innocuous 3x5mm package.  The 0.8mm pitch isn't the worst that I've soldered, but not being able to get at the pins is a little problematic.

So here's the trick.  Flux and thinly tin both the PCB and chip.  Then drop the PCB on a hot plate, and watch for the pads to reflow really fast.  Like, 2-3 seconds fast.  Then place the chip on the flowing pads, and remove from heat.

Luckily, Ian is wise enough to send these in sets of two, which is nice since I managed to badly damage the first one.  My mistake was that I tinned one of the 1206 pads and used it to watch for the board getting hot enough.  Of course, by the time the 1206 pad reflowed, the LGA pads had already flowed, reflowed, re-reflowed, and the chip had gone up in smoke.  I've gained a new respect for designers of reflow manufactured PCBs. 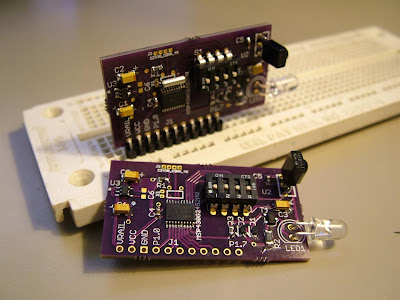 Of course, you have to ask yourself: If Kenneth is stuck in Sunnyvale all summer without access to a soldering iron, how did he manage to solder something as crazy as an LGA-14?  The answer is quite simple:  One of my EE friends and I took a nerd-fest trip up to Davis for the weekend.  He toured some grad labs at UC Davis, I taught him how to SMT solder and caught up on some projects, and we figured out what an AMF is the hard way downtown.  The projects included the MMA7455 breakouts, the latest rev of the SerialCouple project (STILL has some freakin problems; PCBs are hard), and a couple copies of this neat little board.  Until I actually get them running, I'll limit my coverage to these continuing coy hints I keep dropping.  The TSSOP chip is an MSP430G2, and those are IR LEDs and IR 38kHz receivers on the right side of the board.