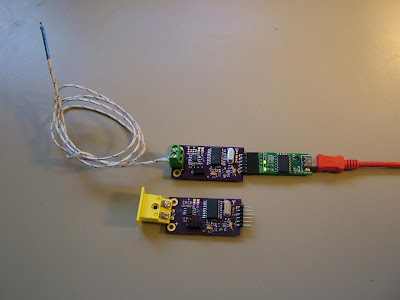 I've written about this project a little before, but I figured I would give an overview of it's capabilities all in one place.  The SerialCouple line of boards are simple, easy to use single-channel thermocouple adapters, meant to be an interface between a thermocouple and a computer or other embedded system.  Shown in the pictures are the model one boards, which are meant to be plugged into FTDI-like USB-to-Serial adapters, but a second model based on RS-232 is in the works.

I've been doing all of my testing with the most standard K type thermocouple, but the MAX31855 part I'm using also supports J, N, T, E, S, and R junctions, which differ in their rated accuracies and temperature ranges.  K thermocouples are rated for measuring temperatures between -200C and 1350C, so for most hobbyist projects, they're perfectly sufficient.  With thermocouples, you can typically expect precision on the order of 2C or 0.75%, and the SerialCouple board supports 2 bits of resolution below the decimal point (so temperatures are read in steps of a quarter degree).  If you're interested in higher resolution than that, I'd suggest you take a look at my analog K thermocouple amplifier, which must be connected to your own ADC, but can give much higher resolution readings. 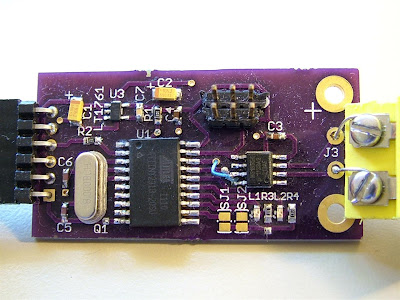 Here is a closeup of the board populated with an Omega MPJ thermocouple jack.  I did make one routing error on the boards, which can be seen by the blue wire between the ATTiny2313 and the MAX31855.  This is the one downside of AVR ICSP being on the SPI bus, in that if any other SPI device doesn't want to stay in reset during programming, they'll keep you from being able to reflash the AVR.  (Fun side note: I didn't solder most of this board.  It was done by one of my friends as his first time doing surface mount.) 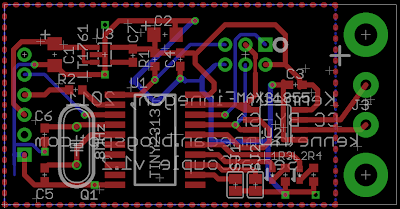 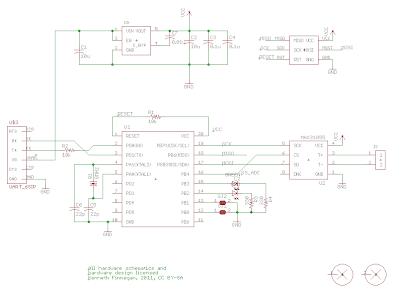 The design was done in Eagle, and I am working on making everything for it available on a Google Code page.

I've solved the incorrect readings issue. Maxim's claim that the MAX31855 chips require no input filtering is incorrect; two 10nF caps resolved all of the noise issues for the model one boards.

There has been some interest in people buying the board, so once I get some more bugs worked out and spin another revision, I'll be open to the possibility of selling the blank PCBs and possibly completed boards.  Sound off in the comments with any interest or questions.