When I moved into my apartment, I ordered a digital antenna from Amazon for my new TV (In the sense of preowned) and digital converter box.  Unfortunately, 10 days later, Amazon was kind enough to cancel my order due to the specific antenna I want being back ordered.  This irritated me somewhat, because I got a good deal (25% off), and having TV was of little more value to me than the $18 + $7 shipping I was about to spend on it, so if it meant waiting 2 months for it to come, I'd wait two months for it to come.  Canceling my order wouldn't make it come any faster, but I'm a really squirrely customer...

The second problem was that I am now, indefinitely, without an antenna for a perfectly good TV + converter box combo.  To add insult to the situation, I have my General amateur license.

What radio amateur, worth the paper his license was printed on, wouldn't be able to get TV reception 10 miles from Sacramento of all places?  Not me, if that's what you'rer thinking. 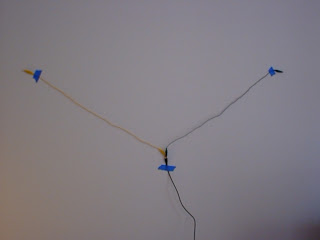 The Three Minute DTV Wonder!
Last year, I got a really nice bag of ten 24 inch long wires with alligator clips on both ends.  Super convenient for working on electronics, or building antennas...
I simply plugged the coax that came with the converter box into the antenna port, and taped it to the wall.  I then clipped one lead to the center pin (very carefully) and the other to the outer shield, and taped the two wires to the wall in a flat dipole configuration.

Obviously, this didn't work very well, since doing the math wouldn't have left very many of the 3 minutes to actually put it together, and it probably wouldn't have helped much anyways, seeing as how antenna building is a black art anyways.  I then started moving the wires up inch by inch, testing the reception until it peaked, and left it there.  This took some time, since the reception while you're working on it gives no indication of reality.  When you're standing next to it, you're part of the antenna and detuning it from what it'll be when you're sitting on the couch, so after each adjustment, I had to walk across the room to test it.

For what it is, and what it was made of, it works pretty well.  The initial channel scan picked up some dozen stations, and of those, at least NBC and CBS are mostly watchable.  Granted, those that aren't watchable, are really not watchable.  Unlike analog TV, when the signal is marginal, it just doesn't work (This is why I hate DTV, in case you were wondering).

Unfortunately, even the reception of NBC and CBS are pretty marginal, so if we have any kind of adverse weather for propagation, the signal drops in and out.

I would like to point out that the antenna is also poorly aimed.  It is about 15 degress clockwise of East-West, so it's pretty much perpedicular to Sacramento.  This was simply a matter of convenience, since the other wall was a little too far away, and the expectation was it was going to be used for 3-5 buisness days.  At some point, if I get suffiently frustrated with it, I might get around to rotating it, but still, for what it is, it works pretty damn well.